D’Angelo is an angel. I got obsessed with Voodoo about a month ago so Black Messiah coming out felt like a personal gift from the universe. On top of that it’s not disappointing, which is unbelievable. People aren’t supposed to come back after 14 years. Musicians lose the magic and they don’t know how to get it back. D’Angelo got it back, so bless his heart. Voodoo hasn’t aged a day, and Black Messiah sounds like it could have come out at any point between then and now. His music is timeless. Sure, there isn’t another world-destroying orgasm like Untitled (How Does It Feel), but we already have Untitled, so bless his heart again for that. I fucking love D’Angelo. 3. Philip Corner/Phoebe Neville – Concerto For Housekeeper And Other Dances With Phoebe (Imminent Frequencies, 2013)

I’ve for the time being lost almost all enthusiasm for experimental music, which is weird because it’s been my main interest in life for maybe the last 6 years. Philip Corner is more or less the only guy I’m still interested in in terms of approach to sound. What I like is that his work breaks down the “event” of music. Music is usually performed towards an end. If the music has a traditional song structure, or even an indeterminate compositional framework, then the performance has the end of faithfully reproducing the pre-established structure. Improvisation works towards some event of a spontaneous moment of creative realization of the performer’s goals. Field recordings document sound events chosen for their specific aural qualities. Corner’s work is impressive because of its arbitrariness. It’s just a guy in a room fucking around with a gong, with no privilege given to him over the rest of the sounds occurring. The act of recording itself comes into play, rather than being treated preciously and removed from the final product; handling noises are present or the volume levels are purposely turned up too far to distort the sounds. I think that he involves himself with sound as an engagement with the environment around him as a sort of meditation, the end result being something where you can’t really say he’s “playing”. It’s actually very hard to take the self-consciousness of a performance out of a recording situation. No matter how non-musical the sounds created are, the knowledge of the documentation makes one aware of the sound involved and they “perform” moving books around on a table instead of doing so naturally. Put briefly, his work is really boring in a really interesting way. Crime is glamorous. A life of drugs, violence, money, and sex is alluring because it presents a non-trivial existence. Narrative almost always centers around events which are significant: love, war, tragedy, etc. because day to day life is banal. The career of a food service employee is boring and repetitive, not worth documenting. The career of a crack-dealer-turned-wealthy-rapper is exciting because every day is portrayed as turbulent and grandiose. Maybe I’m thinking too hard, but perhaps wealth through rap retains glamour because it represents a victory over capitalism, where those with talent manage to rise above the system that oppresses them, rather than the normal banality-of-evil rich old white man. Most rich old white guys don’t even know how to spend money anyways. My point is that Rich Gang is really cool. They’re cool enough that they convinced me to buy a bottle of GTV. I didn’t even know that I was susceptible to branding anymore. It’s a really good mixtape. All of the songs are good.

First show in a long time that made me excited about music. Their work is digital noise, I guess, with some sort of dance music influence, but the resulting sound is so untethered to either lineage that it squeezes between the two and ends up out the other side, not really sounding like anything. It’s just some sounds coming out of a PA connected to a mixer connected to a laptop running a program that generates the sounds. It’s material, nothing to think about. There’s still new ways to get to Walter Marchetti’s bottom of music. Mark told me that when they played the set through the PA the interaction of the tracks started generating spontaneous Shepard tones. They don’t have any recordings right now but they’re working on an album. 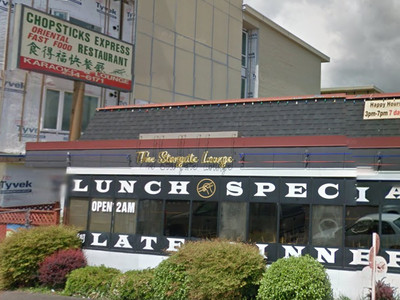 6. Karaoke at Chopsticks II, Portland, OR – Nightly until August 2015

Karaoke is fun. On a good night I feel a communal love for everyone in the room that I’m not sure I’ve ever experienced in public. A proletarian art. Mumbling in experimental music is surprisingly sexual. For all the dreamy ambient drone music people have been doing for however long (are people still doing that?) there is a surprising lack of work that achieves some real kind of liminality, disorienting in the way that nodding off is. crys cole ecstatically exhaling the word “pizza” is one of the more confusing musical experiences I’ve had. This album kind of sucks aside from the title track. Be For Real postures male chauvinism as moral advice and the short tracks are sleazy cocktail music. Yesterday I Had The Blues is all right; it’s the same concept as I Miss You, a soul ballad stretched longer than usual to make the song into a slow-burning multiple climax. The problem is that it’s a happy-sad love song instead of sad-sad abject misery heartbreak song, which doesn’t suit the method, i.e. someone who’s just fallen in love is not likely to want to listen to a song about how sad they were the day before. I Miss You is solid gold though. Something like a complete encapsulation of all the sentimentality I have left in my body. It’s like crying. It’s longer than usually makes sense for a song of this type but the swells keep coming, cloying like when your heart is broken. Heartbreak is self-cannibalization. The longed-for connection with the Other is denied, so in the absence of fulfillment the view turns inward. This becomes wallowing in the gap between reality and desire, which is clingy and pathetic, like this song. It’s great! This live version has nothing on the original but it’s worth watching for Teddy Pendergrass’ hair. https://www.youtube.com/watch?v=Q3-253-Su0U Good spot for a date and you can pick up The Well-Tuned Piano on cassette for only $350! Fantastic essay that sidesteps the dogmatism of political movements by emphasizing the importance of adaptation and ability to constantly shift and refine perspective without adhering to any ideology as incontrovertible or inherent in the project of improving humanity.